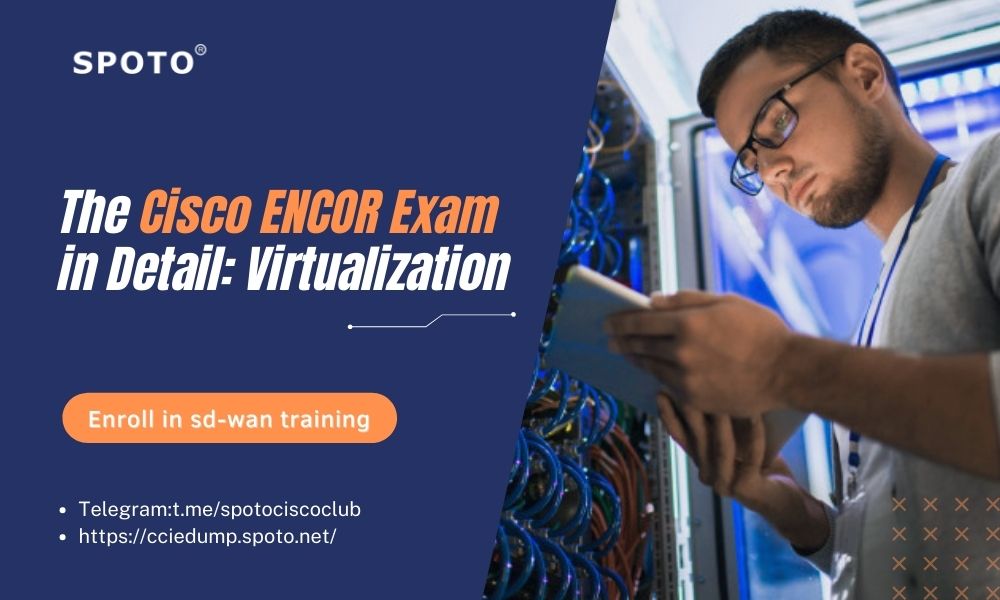 The first section of Cisco's ENCOR Enterprise certification exam 350-401 was covered last time. We'll look at the next central topic area covered on the CCNP Enterprise blueprint, Virtualization, in this article. Given how ordinary Virtualization has become, it is unquestionably deserving of a seat on a professional networking certification test. Virtual networking devices will undoubtedly come up at some time throughout your networking career, most likely sooner rather than later. However, Virtualization is more than just hypervisors and virtual machines, albeit they are essential components.

The Virtualization section accounts for 10% of the total exam weight. Let's have a peek, shall we?

2.2 Set up and test virtualization solutions for data paths.

2.2.b Tunneling using GRE and IPsec

2.3 Explain the concepts of network virtualization.

Don't be intimidated by this subject, and don't be fooled by it. There are complicated concepts in this section, so let's go through them one by one.

A virtual machine is a representation of a real computer. It starts up, runs an operating system, and has access to memory, CPU, network cards, and other resources allocated to it, exactly like a physical machine. Virtual Switching works in the same way that physical Switching does.

Network virtualization has been around for a long time. VRF, or virtual routing and forwarding, generates a virtual router instance on the router, an entirely different routing table. This lets a large company or ISP network have overlapping IP ranges in other portions of the network, limiting which networks can communicate with one another, ensuring that the overlapping does not cause a dispute.

Virtual networks are created across the internet using GRE tunnels and GRE tunnels wrapped with IPSec. While a packet may transit the public internet and have its TTL decremented, a packet traversing the tunnel only perceives it as a single hop any number of times.

LISP and VxLAN, on the other hand, are relatively new subjects. However, their significance is growing, and their use is becoming more prevalent and ubiquitous. The Locator/ID Separation Protocol, or LISP, separates subnets/prefixes from physical locations. As a result, an IP Address can be found anywhere on a network. While LISP is powerful in and of itself, it is also one of the underlying technologies in Cisco's SD-Access architecture, which is a topic in and of itself on the new CCNP blueprint, but more on that later.

VxLAN (Virtual Extensible Local Area Network) is the same way. In a nutshell, VxLAN encapsulates the whole L2 Frame while extending Layer 2 across Layer 3 boundaries. Extending data center subnets across different data centers, for example, allows services to existing in numerous physical places. This makes failover and the high availability of services more accessible. VxLAN, like LISP, is utilized in Cisco's SD-Access architecture. VxLAN is also included in Cisco's ACI Data Center SDN solution. VxLAN works effectively as part of these solutions, but it also works well on its own.

This article should have helped you understand what Virtualization implies in the CCNP Enterprise Core exam. The ENCOR Implementing and Operating Cisco Enterprise Network, Core Technologies class cover all of these subjects. We'll look at the "meat and potatoes" of the ENCOR exam's Infrastructure subject in the upcoming post.